Melaka Sentral bus terminal, commonly called Melaka Sentral, is the main bus station in Malacca. It is located in the Plaza Melaka Sentral, which has been operational for almost 20 years. Melaka bus terminal is just a few km from the city center and some famous tourist sites. The bus terminal is just 2 km away from the AEON Mall Bandaraya Melaka, a popular hangout place, in between Jalan Tun Abdul Razak and Jalan Panglima Awang. This proximity and easy access make it a popular tourist destination, especially during the holidays. Locals, foreigners, and other people from across Malaysia arrive to enjoy the city and Georgetown, a UNESCO World Heritage Site.

The Melaka Sentral bus terminal was designed based on the Kuala Lumpur International Airport for a comfortable bus station. Since Malacca doesn't have train services, buses are the main public transportation option. The Melaka Sentral serves as the central transport hub, with buses and taxi services operating from here. In addition, local city buses, intercity, and interstate buses operate from this terminal. Direct bus routes are operational to Melaka bus terminal from Kuala Lumpur, Ipoh, etc., and from Kuala Lumpur International Airport.The Melaka Sentral terminal acts as a central point for interstate passengers traveling to Singapore as well as domestic passengers who are routed towards the Malaysian Peninsula.

Getting to the Melaka Sentral terminal from within Melaka City

The best way to reach Melaka Sentral terminal is to take a local bus or a private taxi. Passengers cannot take a train or LRT service. However, it is really close to Melaka Airport located at only 6.4kms away. By taxi, it barely takes 15 minutes from the airport to Melaka Sentral.

Buses are the primary option for traveling in Malacca. Local city buses are available at the Melaka Sentral bus terminal. But they will be arriving at the domestic terminal. It is easier to hop from one terminal to the other to reach here from any part of the city. If you are bound for interstate travel, you must cross to the terminal's other section.

Taxis and cabs are the more comfortable option for reaching the bus terminal. However, cabs can be expensive and not a popular choice, since buses are cheaper and available more frequently.

Arriving at the Melaka bus terminal by private vehicle is another option. There is ample parking space, but it is not covered parking. A parking fee is also applied.

redBus users can opt for Melaka Sentral boarding pass with a QR Code by following simple booking steps as given below:

In the case of multiple users, the QR codes sent would be with respect to the number of tickets booked. In case of canceling and rescheduling the tickets, passengers need to remember the following points:

At the time of boarding the bus, passengers can find the QR code scanner at the boarding gate of their respective bus company. Also, note that platform details will not be available on the boarding pass. Passengers would need to check the same from the turnstile screen sometime before the departure. 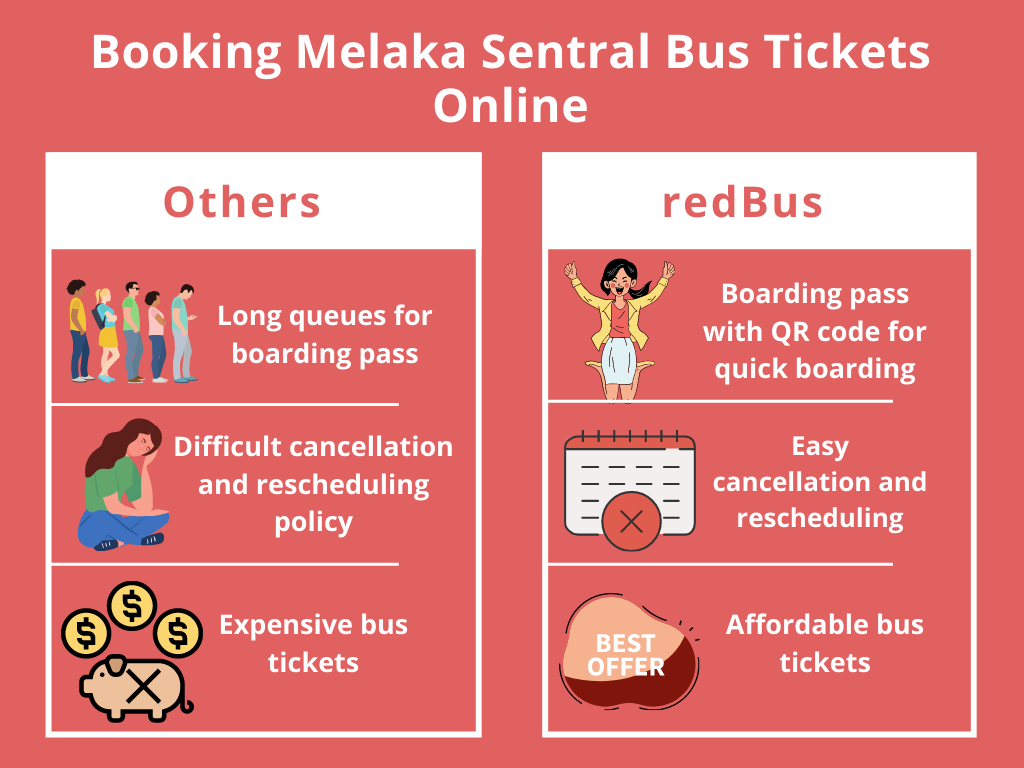 Melaka Sentral has separate sections for the domestic and interstate buses. The terminal has shops and eateries that the passengers and locals enjoy equally. The entire terminal has centralized AC, comfort from the humidity outside. There are four main zones for the bus terminal. Zone A has open spaces and shops. Zone B has ticket counters and playing grounds for children. Zone C is for food, and Zone D has all the parking spaces for cabs and buses.

Being a widely-used bus terminal, Melaka Sentral has several traveller-friendly amenities to make your time there more comfortable: 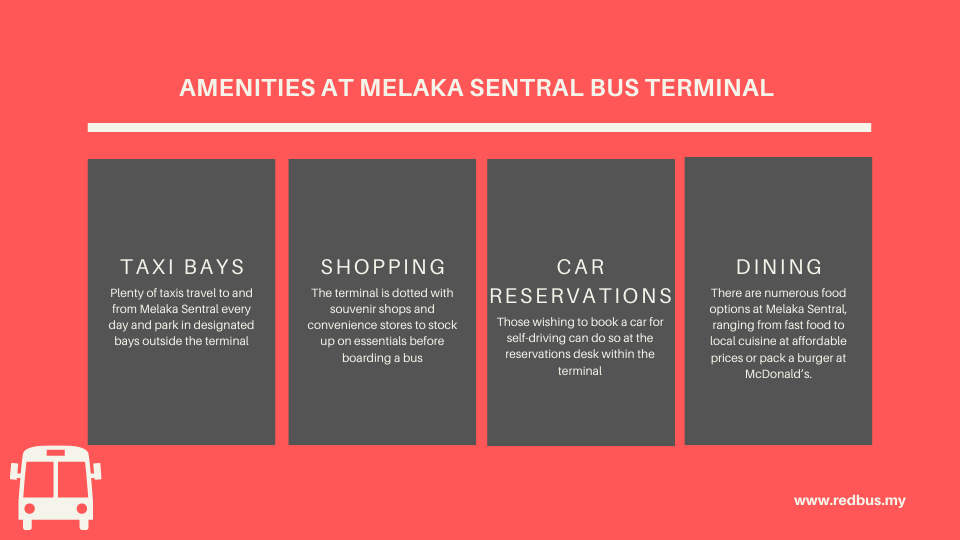 The other facilities here at the bus terminal include,

Melaka Sentral is a hubspot for buses plying through both domestic and interstate routes. Passengers can make the most of daily bus services to travel to Kuala Lumpur, JB Larkin bus terminal, Terminal Bersepadu Selatan (TBS), Singapore or Johor Bahru to name a few. The terminal also connects cities like Paka, Penang, Johor, Ipoh, Terengganu, Kuala Lumpur, and many others by road.

The most popular bus operators operating at Melaka Sentral along these routes are:

Travelers can choose from buses that offer SVIP, Executive, or Club Class seating arrangements depending on the operator of their choice on a route. The coaches of these buses are really top-notch in terms of maintenance, seating arrangement, cleanliness, and other services. Passenger safety and security is of utmost importance with bus operators at Melaka Sentral.

Things to Do in Melaka and Melaka Sentral

Melaka is a historically important place in Malaysia. The place has been influenced by the Dutch, English, and Portuguese. You can find many things to do and see in Melaka. Upon reaching Melaka Sentral, one can easily find many places of interest. Some of them are -

You can book your bus online ticket from all major cities in Malaysia to reach the Melaka Sentral Bus terminal. From this terminal, walk to the local bus station to get buses that connect you to these places.

Disclaimer: Bus timings, routes, and fares are subject to change. Please check the redBus app or website for any last-minute changes.

There are a number of bus companies/operators providing valuable transport services at Melaka Sentral. All the buses come with neat and clean interiors. They also ensure passenger comfort and safety at all times. Some of the popular bus operators are:

Our customers will be eligible for all active offers and cash backs. They can enjoy their bus ride at an affordable price. T&C*. Our simple, fast and secured bus reservation procedure shall keep your hassles away. We would suggest booking your tickets in advance (not mandatory) and experience our amazing discounts.

Q: Where would I find the QR scanner at Melaka Sentral Terminal?
A: You would find the QR code scanner at the boarding area of Melaka Sentral Terminal. The QR scanner also has a turnstile that would show you the platform number after scanning the code.
Q: What discounts are available on Melaka Sentral bus tickets?
A: Melaka Sentral is a popular bus terminal and passengers booking their bus tickets on redBus can avail upto 20% discount on Melaka Sentral bus booking.
Q: Is it mandatory to select the boarding pass option while rescheduling the ticket?
A: No, passengers have an option to deselect the boarding pass by using the toggle key while rescheduling the ticket.
Q: Will I find a redBus counter at the terminals?
A: At the moment we do not have our own counters at the terminals. However, for any questions you can contact us through the Call Center or go to the Bus Operator's own counter.
Q: Do I need to print the boarding pass?
A: It is recommended that you take a print of both your bus ticket and boarding pass since these are not the other’s replacements. Besides, every bus company has different policies, and you might also be required to show the same while boarding.
Q: Should I book my bus ticket at the counter or on the redBus platform?
A: There are 2 ways in which you can buy a bus ticket nationwide. You can physically go to the terminal of your choice, go to the counter of the bus operator with which you want to travel, queue, select a seat and book your ticket. Or if you prefer you can visit redbus.my and reserve your seat in 5 minutes from the comfort of your home or office.