Bus From KLIA to Kl sentral

KLIA to KL Sentral is a busy bus route in Malaysia, with many people travelling to the city from the airport on a daily basis. Buses to KL Sentral are available from both the terminals of KLIA (KLIA1 and KLIA2). Due to excellent road conditions between both the locations in KL, bus transport is quick and convenient. Moreover, since KLIA is the main airport of the city, buses are available at all hours to KL Sentral. On your way to KL Sentral, you can see skyscrapers and other eye-catching landscapes of Kuala Lumpur. The distance between these locations is covered in approximately 1 hour 15 mins. You can easily book a KLIA to KL Sentral bus online on redBus.

Kuala Lumpur International Airport or KLIA is the largest international airport in Malaysia. It is located in the Selangor district, approximately 50 km from Kuala Lumpur. It is the country's main hub for major airlines. Apart from being the busiest airport in Malaysia, KLIA is also the largest airport in the country. You can catch a bus to KL Sentral from the KLIA1 terminal or the KLIA2 terminal. This airport connects Kuala Lumpur to other Malay and global cities.

Kl Sentral is one of Malaysia's largest transport hubs. Located in the centre of Kuala Lumpur, it is an ideal starting point or destination. The complex of KL Sentral includes the city’s central railway station and the KL Sentral bus hub. It seamlessly connects the inter-city and urban areas of Kuala Lumpur. This major meeting point is visited daily by more than 180,000 people. The complex also consists of entertainment and residential zones.

Operating since 2001, KL Sentral is the biggest train transit station in the country. Every day, more than 80 buses are available to KL Sentral from KLIA1/KLIA2.The bus station is located at the bottom of the station, where you will find many bus operators to take you to your final destination.

Are you looking for affordable bus tickets from KLIA to KL Sentral?

Why Choose redBus for Your Journey?

redBus offers an excellent platform for booking bus tickets online. It has a user-friendly interface where users can compare buses and read reviews before finalizing their bus bookings. In addition, travellers can enjoy discounts on their online bus ticket bookings from time to time on this platform.

Kuala Lumpur has moderately hot and humid weather interspersed with rain throughout the year. The average temperature is around 28 degrees. Heavy rainfall usually occurs from May to September and November to March.

Places to stay in KL Sentral

KL Sentral is situated in a good location in Kuala Lumpur, and you will find many accommodation options around the station like hotels, hostels, guesthouses, etc.

At restaurants in KL Sentral, you can try some local Malaysian delicacies. You will also find many food joints and cafes near the bus station.

Things to do in KL Sentral

Places to visit near KL Sentral

Kl Sentral is a transport hub. Here you will find various travel modes like buses, cabs, trains, etc., to move within the city and outside.

The KL Sentral transit station is open at all hours for commuters. Between October and November, many people visit KL for the Shopping Carnival. KL hosts the Malaysian Grand Prix, which attracts many visitors in April. You can also visit Kuala Lumpur in September to celebrate the Festival of Malaysia. It is organised every year and attracts people from different Malay states. Hot Air Balloon Fiesta in March and Good Vibes Festival in August are also some good times to visit Kuala Lumpur. Based on the rain conditions, it is better to visit the capital city between May and July. Kuala Lumpur is relatively dry between May and July than in other months of the year.

Ticket prices for a Klia to Kl Sentral bus can range from 10.8 MYR to 15 MYR. However, prices may vary depending on the availability of seats and available operators.

How to book KLIA to Kl sentral bus tickets online on redBus?

To book KLIA to Kl sentral bus tickets online on redBus, follow the steps mentioned below - 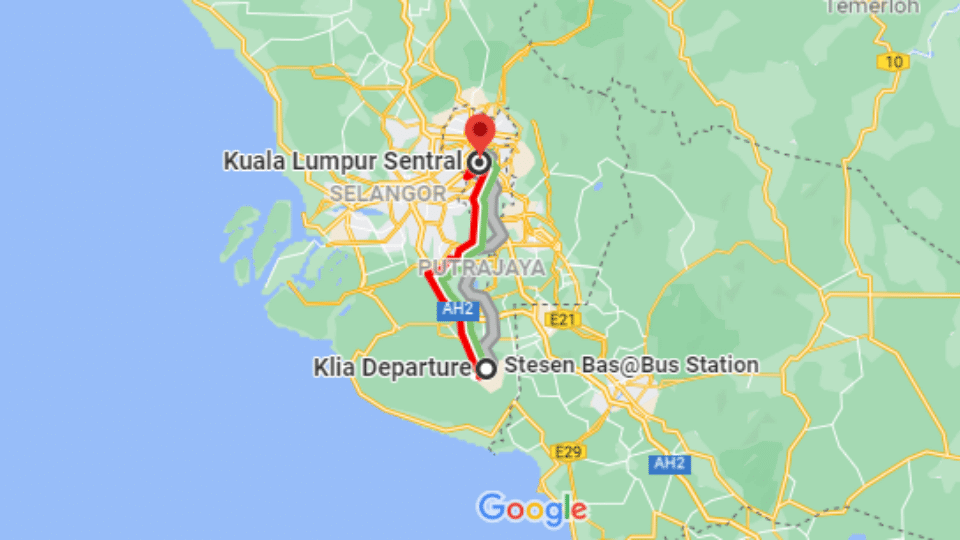 How do I pay for my bus ticket on the redBus website?

A: There are a number of different modes of payment offered to customers. Customers can either pay by credit card, debit card, or they can select any of the banks listed when you click the “FPX (Malaysia Online Bank Transfer).

Can I get any discount on KLIA to Kl sentral bus tickets?

How do I book a bus from KLIA to Kl sentral?

A: You can either visit the terminal and go the booth belonging to the bus operator of your choice, wait in line, select a seat, and book your ticket. If you’d rather not do that, you can visit www.redbus.my and book your seat within 5 minutes.

Which is the best offer for KLIA to Kl sentral bus tickets on the redBus platform?

A: The offer of upto 20% off on KLIA to Kl sentral bus tickets is, indeed, the best offer on the redBus platform as customers can save a lot on their totale bus ticket price.

Can I reschedule my journey after I have booked my ticket?

A: Yes, you can. But this feature is limited to only a few bus operators in Malaysia. Look for the reschedule icon before booking your ticket.

How can I make an online bus ticket booking in Malaysia?

A: You can book a bus of your choice to any destination in Malaysia by logging on to the official website of redBus which is www.redbus.my . The site is user-friendly and you can book your bus ticket in a matter of minutes.

A globally recognised bus booking portal, redBus offers the best prices in the market, thereby making your bus booking experience all the more satisfying. redBus provides updated prices and bus schedules of the top bus providers that operate in the region. Customers can complete their payment through the secure network and receive the confirmation of the same in a matter of seconds. Book a bus ticket online through redBus and travel from KLIA to Kl sentral by clicking on the link provided below: https://www.redbus.com/bus-ticket/klia-to-kl-sentral

redBus caters to every Spanish speaker as well. Click on the link provided below to find out more: https://www.redbus.com/es-419/pasajes-de-bus/klia-a-kl-sentral

Learn more about such exciting offers at: https://m.redbus.my/offers

If you did not choose the return date at the start, you could do so when the list of available buses for your onward journey is displayed on redBus by using the 'Add a return ticket' button. You can use it to book return tickets for the KL Sentral to KLIA route.

OTHER ROUTES IN MALAYSIA

Do you want to exit reschedule flow?